Owned by Roger and Cindy Grossmann, Faith Hope & Charity Vineyards is nestled on 312 acres between two ridges and a canyon in Terrebonne, Oregon just 14 miles from Smith Rock State Park. The tasting room and event center are surrounded by the rich beauty of the winery’s namesake the Three Sisters Mountain range (originally named Faith Hope and Charity), along with 15 acres of vineyard, a pond, beautiful grounds, and there are even a few llamas hanging around!

When the winery first opened, Faith Hope and Charity’s winemakers utilized grapes from Monkey Face Vineyards near Smith Rock in Terrebonne, while they patiently waited for their vines to mature. Taking into consideration the short growing season and often dramatic temperature drops of the high desert, the vineyard owners decided to focus on the growth of cold-hardy grapes which could withstand frost and have a shorter growing season.

In September of 2015, the first block of Marquette was harvested, a hybrid grape that is said to be the cousin of Frontenac and the grandson of Pinot Noir. Because of the extensive research of cold-hardy grapes done by Cornell and the University of Minnesota, successful grape growing can be made possible in areas with unpredictable weather.

2016 brought another successful harvest. Once a dream that grapes grown in Central Oregon could be made into fine wine, is now a reality. Future plans for the vineyard include an on-premise winery production, guest cottages, an amphitheater, and a farm-to-table garden. Faith, Hope, and Charity Vineyards will always stand by the belief in sustainable and natural farming practices, to continue to provide guests with the highest quality product. 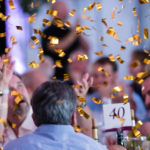